Why should I spay or neuter my pet?

Animals that are fixed are less likely to roam, bite, fight and urine-mark.

Animals that are fixed have a significantly decreased risk of certain types of cancer.

Spaying will eliminate the incessant crying, nervous behavior and unwanted male suitors that can occur during a female pet’s heat cycle.

Spaying or neutering at an early age can result in a more affectionate and happy pet.

Because it’s the right thing to do for your pet and your community. Every year, more than 33,000 unwanted animals are euthanized in the Greater Cincinnati area simply because there are not enough homes.

Do your part. Fix your pet! 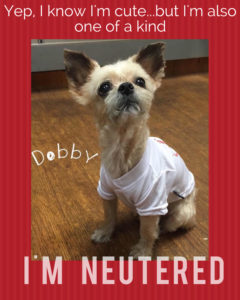 Over 70,000 puppies and kittens are born in the U.S. EACH DAY, compared to 10,000 humans. Over HALF of those litters are unintended.

Millions of these unwanted, innocent dogs and cats are abandoned.  Some fend for themselves on the streets. Many are abused or neglected. Over 6 million end up in overcrowded, underfunded county shelters each year, where over 4 million not lucky enough to be quickly adopted are euthanized each year.

The Solution is Simple.

Spaying and neutering dogs and cats prevents unwanted births, substantially reducing the number of animals that will wind up in shelters and face euthanasia.

Each year Peppermint Pig Animal Rescue pays to spay and neuter hundreds of cats/kittens in an effort  to reduce cat overpopulation.
Cat overpopulation is the single hardest issue we and other shelters/ rescues face. There are simply too many cats for the available foster/forever homes available.
An average cat has 1-8 kittens per litter and 2-3 litters per year. During her productive life, one female cat could have more than 100 kittens. A single pair of cats and their kittens can produce as many as 420,000 kittens in just 7 years.
We have found that anyone that already has an adult cat won’t foster or adopt another adult cat because unwanted behaviors like marking and fights over territory usually occur. 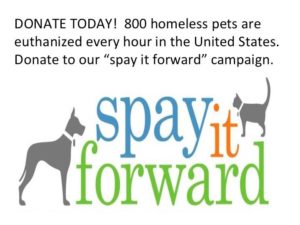 Peppermint Pig Animal Rescue can provide a cat or dog spay/neuter voucher to those in the community who qualify.

The voucher is free to the recipient but Peppermint Pig Animal Rescue is billed $40 to $120 for each voucher that is redeemed at a participating vet.

Please consider making a Donation to our SPAY IT FORWARD campaign. Every little bit helps us to prevent more pet overpopulation. No amount is too small!

To be considered for a spay/neuter voucher, please come in person to our Peppermint Pig Thrift and Gift store at:

on Saturday 12-4 and speak with our director.

Thank you for taking the first step in reducing pet overpopulation! 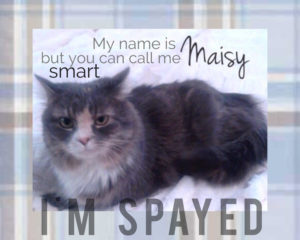 If there is any problem easily solved, it should be pet overpopulation, right? All a pet guardian has to do is spay or neuter their animal companion.

No, it’s not that simple. In fact there is such reluctance among many guardians to have their animals spayed or neutered that in the United States, 5 million unwanted cats and dogs are destroyed each year.

There is a lot of misinformation and misunderstanding about spaying and neutering. It’s a real tragedy that so many dogs and cats are killed each year, and yet we can’t kill the myths perpetuating their destruction.

Will you help us destroy the myths that are destroying the animals? You can start with yourself. Here is a list of some of the more popular myths. Which do you still believe?

Myth: It’s better to allow your female to have one litter before she is spayed.

Fact: Not true! There is no information to prove this claim. In fact, the best time to spay your dog or cat is before her first heat. It’s better for her to be spayed at a young age because spaying prevents uterine infections that often occur later in her life. Spaying also reduces the incidence of breast cancer, and eliminates unwanted crowds of males from bothering her. Having a litter does not provide any health benefit for the dog or cat, but it does create puppies or kittens that need homes.

Myth: Dogs and cats have to be six months old to get fixed.

Fact: Puppies and kittens who are as young as 8 weeks old can be spayed or neutered, as long as they weigh at least two pounds. And spaying before a female’s first heat is almost guaranteed to prevent breast tumors.

Myth: Mother dogs and cats cannot get pregnant if they are still nursing a litter.

Myth: Pups or kittens from the same litter cannot breed with each other.

Fact: Brothers and sisters can, and often do, breed with each other. And parents can breed with their babies.

Myth: The operation costs too much money.

Myth: Preventing pets from having litters is unnatural.

Fact: We’re already interfered with nature by domesticating dogs and cats. In doing so we helped create this problem. Now it’s our responsibility to solve it. Killing thousands of animals simply because there aren’t enough homes is unnatural.

Myth: Pets become fat and lazy after being spayed or neutered.

Fact: All animals tend to get calmer as they pass puppy or kitten stages. They need exercise and just enough food to keep them healthy. Surgery doesn’t make them fat – fat animals are usually overfed and underexercised. It’s true there can be a tendency for a pet to put on some weight after the operation, but it is not true that the operation causes the condition. Male dogs and cats, in particular, will roam less and burn fewer calories. If you see signs of weight gain, reduce the calories and increase walks or play sessions; that will keep the waistline trim.

Fact: The only change in behavior you’ll see are positive ones. Male cats tend to reduce their territorial spraying, depending on the age they were neutered. If neutered young enough, they may never develop the habit. Neutered male cats and dogs fight less and wander less since they aren’t interested in pursuing females in heat. Therefore their chances of injuries, being hit by a car or getting lost are greatly reduced. Females will stop calling for a mate, and their urine will no longer be a long-distance calling card for throngs of suitors.

Myth: I can find homes for all the puppies and kittens that my female produces.

Fact: Finding good homes for kittens and puppies is not easy. Many pets are discarded when they start to grow. And, who will make sure that your pet’s offspring won’t mature, breed and contribute to the existing problem. There is no way you can guarantee that. Do yourself a favor and avoid the problem of trying to find homes for your pet’s litter. If you know of good homes, send your friends to the local animal shelter. There are many animals waiting for good homes and their time is running out.

Myth: It’s okay to spay female dogs and cats, but males don’t need to be fixed, because they aren’t the ones having litters.

Fact: Our favorite myth because it’s the most ridiculous, yet the most prevalent. I guess the immaculate conception explains canine and feline pregnancies. Don’t forget that it takes two. Male dogs and cats who are not neutered usually develop prostate problems as they get older. They also react to every female in the neighborhood who comes into heat. That’s why 80% of road killed dogs and cats are unneutered males looking for love in all the wrong places.

Myth: If a dog or cat is kept inside all the time, they don’t have to be spayed or neutered.

Fact: Females can have false pregnancies, breast cancer, uterine cancer, ovarian cancer, and other health problems. Males can have prostate problems, mark their territory with urine, fight with other animals, try to leave home, and feel frustrated all the time.

If you pet isn’t spayed or neutered, please make an appointment today. Help us help the homeless animals by destroying these myths. We can’t do it without you. 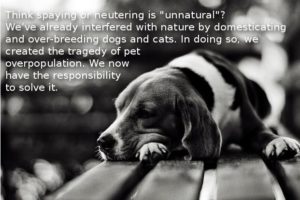